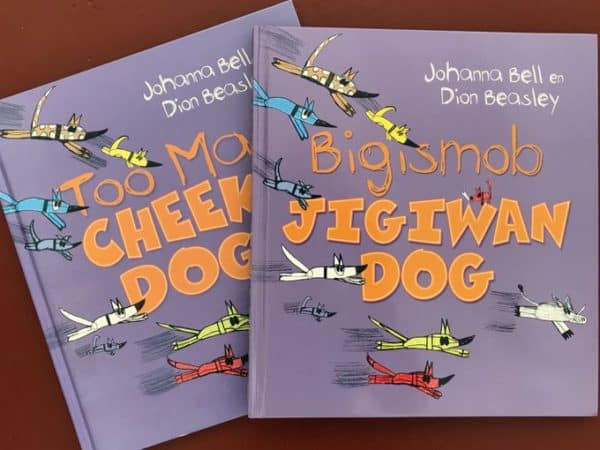 Remember back when Covid first took hold and we were all in lockdown? Well that difficult time was also when we celebrated the release of Bigismob Jigiwan Dog, the Kriol translation of Too Many Cheeky Dogs, the best-selling picture book by Dion Beasley and Johanna Bell. Bigismob Jigiwan Dog’s release was new and exciting – it was the first time a major publisher had invested in an Indigenous language translation of an existing title.

Now, it’s been over a year since the book was released and lots has happened!

One of the most exciting developments has only happened this month – Bigismob Jigiwan Dog came to life! Well sorta. NT Music School got together with brilliant Ngukurr educator Marlene Andrews to create an animated video version of the book, complimented by a fun and engaging reading by Marlene. It’s fantastic to see the book come to life and it’s already a hit in classrooms.

The Jigiwan Dog animation is part of the Rising Star series of programs for remote NT early years students, produced by NT Music School and it’s not the first time Rising Star have brought a Kriol book to life – you can check out the reading and animation of Yakai Beibigel here as well as see the new Bigismob Jigiwan Dog video below:

When Covid allowed us to travel and hold events like festivals, the Meigim Kriol Strongbala gang was lucky enough to be invited to two festivals in 2020. The first one was a great little event in Katherine – a Literacy Festival organised by KICS (Katherine Isolated Childrens Services). There, we got to share Bigismob Jigiwan Dog to a great audience alongside some other wonderful local picture books and authors.

It was a great experience that helped us get ready for an even bigger festival – the 2020 NT Writer’s Festival, organised by the NT Writers Centre. We travelled to Darwin and presented a session called Translation and Two-Ways, where we talked about Kriol, the process of translating Too Many Cheeky Dogs into Kriol and the importance of having books in Kriol. Our session was sold out, well-received and presented in both Kriol and English.

After our successful talk, we were also invited to write for NT Writers Centre’s members magazine, Imprint, where we again shared the value and importance of publishing books in Kriol and translating books into Indigenous languages. We also featured in an SBS article, sharing our experiences and ideas there too. You can read the article here: “While many Indigenous languages are disappearing, one has more speakers than ever“.

“For the younger generation, Kriol is the only language that we know fluently so it’s very important that we introduce Kriol to the community at school. It’s the first language that I spoke so it’s a big part of my identity.” – Shania Miller – SBS Online

The other fantastic thing that has happened with Bigismob Jigiwan Dog since its release is seeing the book find homes all over the country! A big question we had was whether anyone would actually buy the book. Turns out, all the copies that were initially printed got sold and publishers Allen & Unwin had to print another batch. This is a great outcome and thanks in part to the local shops, galleries and cafes who were happy to sell the book for us. This includes a bunch of places in Katherine: The Finch Cafe, Mimi Arts, Top News and Godinymayin Yijard Rivers Arts and Culture Centre (GYRACC). Thanks!

We were also able to set up our online store and sell quite a few copies of Bigismob Jigiwan Dog direct, mailing them out across the country.

Creating Bigismob Jigiwan Dog and then seeing what happened once it was out in the world has been fascinating and rewarding. Thanks to everyone who has bought the book, used it in classrooms and supported it. Thanks to Allen & Unwin for taking a chance on it and thanks to Johanna Bell and Dion Beasley for generously supporting the idea of having their book in Kriol.

Well one super-exciting recent development wasn’t anything to do with us or with Kriol: after Allen & Unwin saw the positive response to Bigismob Jigiwan Dog, they have now released another translation of the book! This time, it’s in Pitjantjatjara, a traditional language spoken widely in desert areas of the NT and South Australia. The Pitjantjatjara version, called Papa Mawal-mawalpa Tjuta, was released this month, translated by Iwiri Aboriginal Corporation and also features a free audio reading by Rhoda Tjitayi. Check it out here: https://www.allenandunwin.com/browse/books/childrens/Too-Many-Cheeky-Dogs-Papa-Mawal-mawalpa-Tjuta-Johanna-Bell-illustrated-by-Dion-Beasley-9781760526696

As for us, we are cheekily barking at more authors and publishers for new translated Kriol books to be released. Stay tuned!