The results of the 2021 Census have recently been released and data about Kriol shows it to be a growing language. Read on for more details on what the 2021 Census tells us about Kriol. (You can find all this info and more on the SBS Census Explorer: https://www.sbs.com.au/news/creative/census-explorer/).

How many Kriol speakers are there?

We do know that Census data isn’t perfect though. For example, some people don’t like labelling themselves as Kriol speakers even if they speak and understand it. Also, the questions in the Census sometimes make it difficult to give accurate information, for example if you speak both a traditional language and Kriol at home, the Census only lets you list one of those languages.

Where do Kriol speakers live?

As expected, Kriol speakers mostly live in and around ‘Kriol Kantri’ – the Kimberleys in Western Australia and around the Katherine region in the Northern Territory. The blue squares on the map below show you where Kriol speakers live: 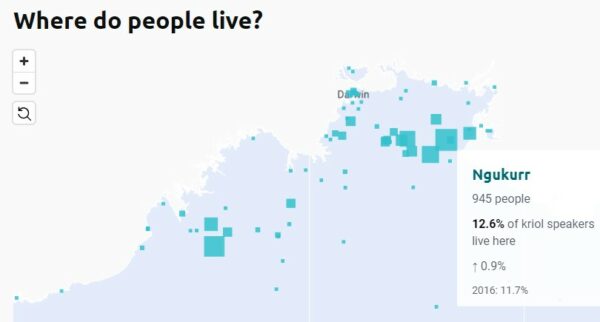 Here is a list of the communities that have the greatest numbers of people speaking Kriol at home: 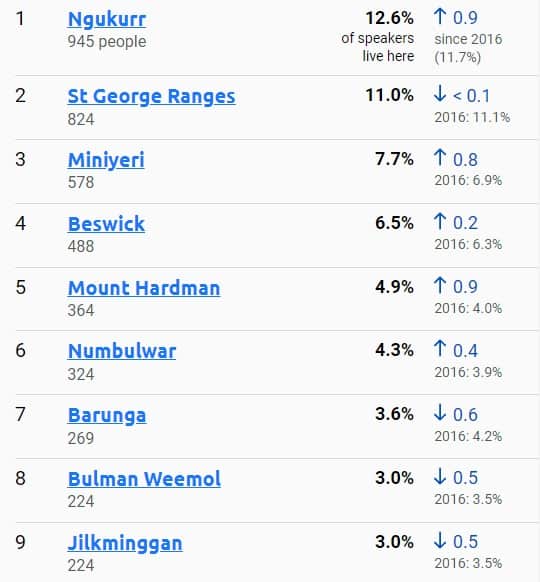 All of these communities are east of Katherine, either along the Roper Highway (Ngukurr, Minyerri, Numbulwar and Jilkminggan) or along the Central Arnhem Highway (Beswick, Barunga and Bulman/Weemon). The other two places listed – St George Ranges and Mount Hardman – are located in the Kimberleys and cover a number of smaller communities near Fitzroy Crossing. Number 10 on the list is not shown above, but it is Nauiyu, or Daly River (with 190 people speaking Kriol at home), so in a slightly different region from the others.

The Census data says that 12.6%, or 1 in 8 people who said they speak Kriol at home live in the community of Ngukurr. If that is right, then it makes sense that this is why the Meigim Kriol Strongbala program was started in this community! Another thing to note is that in places with lots of Kriol speakers, Kriol is by a long way the most spoken language there, with only a handful of people speaking English or other languages at home – see the graphs below. (The only exception is Numbulwar, where Nunggubuyu is also widely spoken and less than 50% reported speaking Kriol at home).

The Census collects all kinds of other information too, like information about people’s work, education, age and ancestry. From this data, we can get more of a sense of what people who speak Kriol are like. 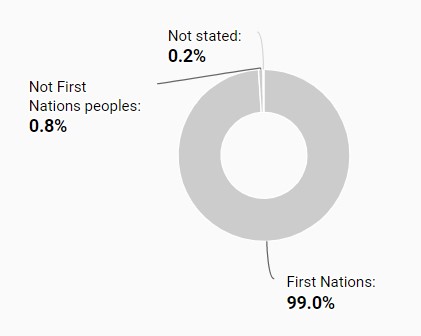 One of the reasons Census data is important is it helps governments and other service providers better understand the needs of people and provide necessary supports. So what support is there for the thousands of Kriol speakers out there? SBS wrote a great article a few articles discussing some key issues for the language: While many Indigenous languages are disappearing, one has more speakers than ever. 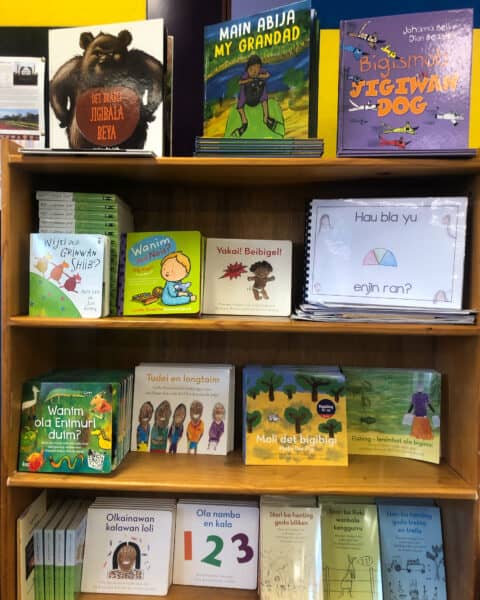 The Northern Territory and Western Australian governments support Kriol speakers through interpreting services like AIWA and AIS. Some churches like the Anglican Church do a great job of including Kriol in their work, with efforts like translating the Bible and creating an online dictionary. Years ago, the NT Education Department ran a Kriol-English bilingual school in Barunga and resources made by that school are still available. More recently the Indigenous Literacy Foundation has started to create literature in Kriol for children, with other publishers now getting on board too.

Outside of that, there really isn’t a lot of support for the Kriol language and its speakers. For example, the Federal Government’s $27 million Indigenous Language and Arts Support funding explicitly says it can’t be used for Kriol (see below). This is one of the reasons why Yugul Mangi Development Aboriginal Corporation put money towards setting up Meigim Kriol Strongbala back in 2019. Our program has tried to fill some of the gaps such as working closely with Ngukurr School to ensure Kriol programs are a core part of the students’ learning. We’ve also worked to increase the number of Kriol books and children’s literature available as well as other efforts like promoting Kriol on digital spaces and social media and creating other resources like alphabet posters and cartoons.

Even though there are an increasing number of activities supporting Kriol, it can still be hard to find resources and support for the language. Not many schools with Kriol speakers have structured Kriol programs and Kriol is still only mostly used in homes rather than in work places and other more formal contexts. English is still seen a much more powerful language which can make life difficult for Kriol speakers it’s why we see statistics like in the census where Kriol speakers are generally poorer and don’t go on the higher education. We look forward to continuing our work and supporting others doing similar work so that Kriol speakers can flourish!

Use the SBS Census Explorer to look up other First Nations languages or to find out more about the languages spoken in your community or town: https://www.sbs.com.au/news/creative/census-explorer/