With huge thanks to Ned Lander Media, the two Kriol episodes of award-winning kids cartoon Little J & Big Cuz that we helped create in 2021 are now freely available on our YouTube page! 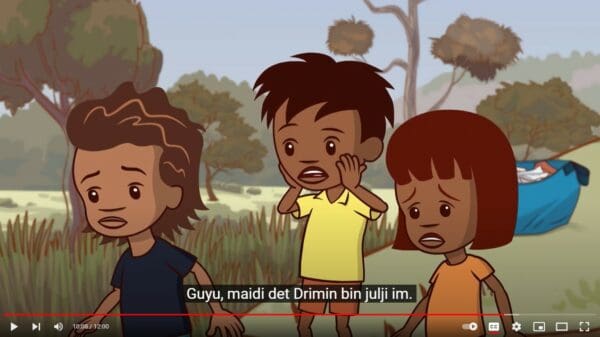 Since holding a “world premiere” screening in Ngukurr in late 2021, the episodes have been watched many times over in Ngukurr and also intermittently appear on SBS on Demand and ABC iView. Now, thanks to the show’s producers, they are also now on our YouTube page for all to see. We’ve added Kriol subtitles too, so viewers can read along.

The first episode is Bigiswan Trip la Riba (called “Big River Adventure” in English). In this episode, Big Cuz is filming a news report for a school project while a group of four adventurous kids (and an Old Dog) follow Uncle Mick to the river along with Aaron the class mascot. To see all the adventures that happen at the river, you can watch the full episode here:

The second Kriol episode we helped create is called Sineik Ai, known as “Serpent’s Eye” in English. This episode is set at school while students and deep in the middle of a marble craze. The big kids won’t let Little J and Levi play so they have their own adventure. Meanwhile, Big Cuz is worried about losing friends because she keeps winning everyone’s marbles! You can check out this episode here:

They even made an ad for this episode, and included some students from Ngukurr playing marbles, just like in the cartoon!

Meigim Kriol Strongbala worked with Ngukurr School to translate the two scripts for these episodes. The translations were all done by a great team of students, who infused the scripts with their real-world insights into the worlds and language of Kriol-speaking school students. You can read more about this amazing project in this article from Teacher magazine: https://www.teachermagazine.com/au_en/articles/indigenous-translation-project-from-the-classroom-to-the-screen

‘When I read their translations, it was like being a little kid again. I felt like a little kid. It was just so great!’ – Angelina Joshua (Big Cuz), Teacher Magazine

The other exciting part of creating the episodes was recording all the characters and dialogue. For that part, Savage Films spent two weeks in Ngukurr looking for the right people and getting through hours of recording. It was fantastic to see Ngukurr people using their own language in such creative ways and walking in the same shoes as some of Australia’s best First Nations actors who also work on Little J and Big Cuz, like Deborah Mailman, Miranda Tapsell and Shari Sebbens. Check out the awesome behind-the-scenes video that Little J and Big Cuz producers made when they were in Ngukurr:

Here’s a full list of all the Ngukurr people who helped create these episodes:

We think the end results are brilliant and we hope you enjoy the episodes too!