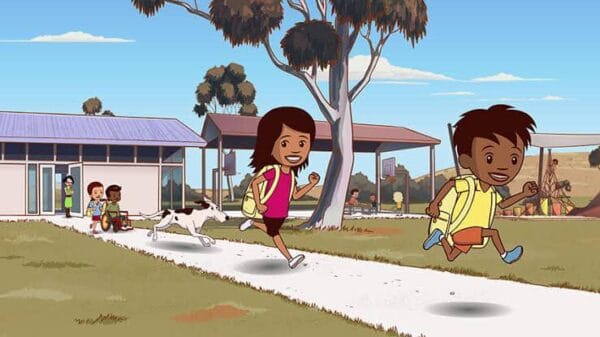 If you’ve never met Little J & Big Cuz before, they are a couple of Aboriginal kids aged 5 and 9 living with their Nanna and Old Dog. They’ve been turning up on screens in cartoon form on ABC, SBS and NITV since 2017, having all kinds of adventures at school, in their community and on country across two award-winning seasons. And now, Little J, Big Cuz and their friends and family are learning Kriol!

As well as the English versions, Little J & Big Cuz is also made in a number of Indigenous languages. Across the first two seasons, this included languages like Arrernte, Warlpiri, Djambarrpuyngu and Pitjantjatjara, all viewable on SBS on Demand. This year, Season 3 of Little J & Big Cuz will be released and – along with the English episodes – a new batch of Indigenous language episodes are being created, this time including Kriol!

The first big job in creating Kriol episodes of Little J & Big Cuz is to translate the English scripts into Kriol. It took a few months, but we finally got there and two fully translated scripts ready to go!

Not only is this an huge effort, but the process we went through to translate the scripts was also a school education project. Ngukurr School and Meigim Kriol Strongbala assembled a student team of translators, made up of students from different Upper Primary and Secondary classes. Of course, none of us had ever undertaken a task like this before. For the students, it was a great opportunity to develop their Kriol literacy skills and their ability to negotiate their way between English and Kriol. It was also a brilliant real-world project that students could draw a real sense of pride from.

In terms of the work the student produced, they brought a creative edge to the project too. Who better to write Kriol dialogue for a bunch of kids having all kinds of adventures in Kriol than a bunch of Kriol-speaking kids? For example, one episode involves playground arguments over games of marbles – something which was very familiar for the student translation team and so they were able to draw on direct experience to bring authenticity to the Kriol scripts.

Across the translation part of the project, around twelve students contributed, translating around 300 lines of dialogue – a mammoth effort!

Casting call! Want to be part of the show?

Now that the two scripts are translated, we are ready for the next step – recording! The makers of Little J & Big Cuz are sending a team to Ngukurr to help with this step, but we also need local mob to have a go and do the voices of the Kriol-speaking characters in Little J & Big Cuz. The first part is called casting, where anybody can go and try out. This is happening in Ngukurr on the week of August 30 and we’d love to see lots of Ngukurr residents have a go. 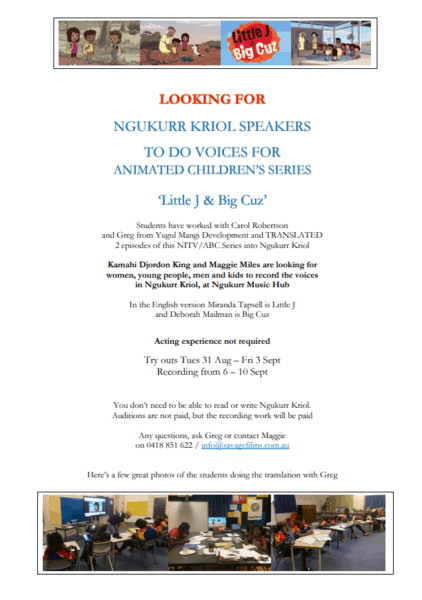 From there, they will pick people to start recording the cartoon for real. For Ngukurr residents who get chosen to be a cartoon voice, they will get paid for their work.